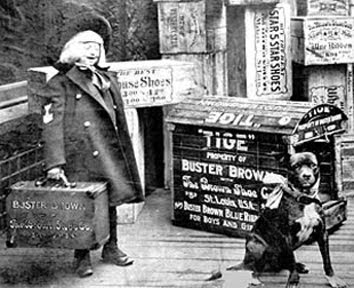 In my never ending quest for the truth about famous pit bull owners and famous pit bulls, I found these 1904 Thomas Edison film shorts about Buster Brown and his dog Tige. Buster Brown's Tige is usually found on the feel good honorary list of famous pit bulls, somewhere after Petey the Great Nanny Dog and Stubby the War Hero and before RCA Nipper and Rachel Ray's Isaboo. But what does anyone really know about Tige?
Buster Brown was originally a cartoon strip created by Richard Outcault in 1902. It is hard to say what kind of dog Tige was in the cartoon but he appears to be a pit bulldog in Thomas Edison's five film shorts. One of the sources that I found identified Edison's Tige, whose real name was Mannie, as a Boxer. I believe that is most likely incorrect but even if Mannie was a Boxer, at that time they were used in the pit and closely resembled "pit bulls". While viewing the films, compare Mannie to the Boxer of 1900. It is not clear how many of these short films Edison created about Buster Brown and Tige but what is clear is that the pit bull apologia hasn't seen them. Buster Brown's dog is a pit bull, a nasty pit bull, just like his fictional owner.
Multiple dogs have portrayed Tige. Mannie is the pit bulldog featured in the Edison films but at least one of the approximately dozen Peteys also played Tige in the 1920's. This blog will focus on Mannie only. Petey will be featured in an upcoming blog.
In this first film short entitled Buster and Tige Puts a Baloon Vender Out of Business, Buster's mother tries to purchase a balloon for her son but then waves the man on. Buster has a tantrum, pushes the man and then runs off screen and gets Tige. Tige enters the scene and immediately attacks the man, biting him on the seat of his pants. The balloon vender shakes Tige off and then Tige begins to jump up and try to attack his balloons. Immediately three more pit bulldogs enter the scene and all four dogs are now attacking the balloons in a frenzy.

1904 - Buster and Tige
Uploaded by popefucker. - Full seasons and entire episodes online.
In this second film short entitled Buster Makes Room for His Mama at the Bargain Counter Buster, his mother and Tige go into a store. There are about a dozen women occupying the area, fighting over articles of clothing and preventing his mother from tending to her business. But Buster has a plan. Buster directs Tige to jump up and try to grab the stockings that are hanging from the ceiling. In his loyal people pleasing pit bull manner, Tige begins jumping up and down, barking and doing flips. This scares the women who all flee the store in horror, freeing up space for Buster's mother. A small chair is tossed in by someone off camera and Tige attacks it.

1904 - Buster Makes Room for His Mama
Uploaded by popefucker. - Classic TV and last night's shows, online.
In the third film short, and possibly my favorite, titled Buster and the Dude, Buster, Tige, and his mother are on a city sidewalk outside of a store. Buster's mother meets a man with a dog, possibly a boston bulldog. Buster demands his mother's attention and when she ignores him, Buster gets even by siccing Tige on the man's the dog.

1904 - Buster And The Dude
Uploaded by popefucker. - Classic TV and last night's shows, online.
In this fourth film short titled Buster's Dog to the Rescue, Buster Brown is once again portrayed as a nasty brat. Buster is told to leave the box of cookies alone. When he persists, they are placed high out of his reach. When Buster is caught trying to climb a ladder to get them, he is spanked and then tied to a chair. But what Buster wants, Buster gets. Buster calls Tige and directs Tige to climb the ladder and retrieve the cookies.

Buster's Dog to the Rescue
Uploaded by popefucker. - Watch feature films and entire TV shows.
In this final Edison film short, we see many dogs of many breeds. Mannie makes an appearance in the final seconds to attack a man.
Dogsbite.org just pointed out that the final customer requested a FIGHTING BULL. Apparently the little Boston Bull wasn't game enough. good catch!

1904 - Dog Factory
Uploaded by popefucker. - Classic TV and last night's shows, online.
Mannie starred in other film shorts. He is considered the first dog star and went on to become famous in Vaudville. In the 1901 film titled Pie, Tramp and the Bulldog, Mannie scuffles with a Tramp over a pie. The film ends with the Tramp running off and Mannie hanging onto the seat of his pants. There is no film of this one, I relied on the description in the Internet Movie Data Base.
Mannie also appeared in a 1901 boxing film. Mannie wildly jumps up and down trying to get a hold of a punching bag suspended from the ceiling. Mannie finally knocks it down and provides the audience with a fine performance of bite, hold and shake.

It seems that pit bulldogs were the dog of choice in Edison's films. If you needed a dog to bite, hold and shake, jump up tirelessly or attack other dogs and people, the pit bulldog was the only logical choice. The reoccurring pit bulldog in Edison's film shorts may have helped contribute to the myth that Thomas Edison owned a pit bull.
More information on Buster Brown, Tige and Mannie
famous pit bull owners: the thomas alva edison edition
dog breed history lesson: the boxer
http://michelesworld.net/dmm/frog/gremlin/buster.htm
http://www.weirdwildrealm.com/f-busterbrownseries.html
http://www.npr.org/programs/morning/features/patc/busterbrown/index.html
http://www.imdb.com/title/tt0231959/
http://en.wikipedia.org/wiki/Richard_F._Outcault
http://en.wikipedia.org/wiki/Buster_Brown
Pie, Tramp and the the Bulldog
order a Tige t-shirt from zazzle 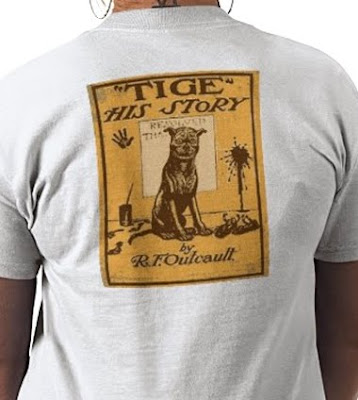 That is one creepy looking dog!
Posted by scurrilous amateur blogger at 1:45 AM 7 comments:

Labels: buster brown, famous pit bulls, mannie, Thomas Edison, tige
Newer Posts Older Posts Home
Subscribe to: Posts (Atom)
“The great enemy of the truth is very often not the lie — deliberate, contrived and dishonest — but the myth — persistent, persuasive and unrealistic. Too often we hold fast to the cliches of our forebears. We subject all facts to a prefabricated set of interpretations. We enjoy the comfort of opinion without the discomfort of thought.” John F. Kennedy