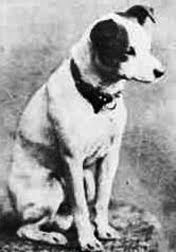 Nipper, 1884-1895
Like all of the famous "pit bulls" through history, there are more lies than truth around this famous icon. The pit bull apologia often lists Nipper as an american pit bull terrier and occassionally he is listed as owned by Thomas Edison.
Nipper, the famous advertising icon, was born in 1884 in Bristol, England. Thomas Edison on the other hand, was american. The famous painting of Nipper and his trademarked image were not even owned by Edison, in fact, they were owned by Edison's competitor Emile Berliner. Nipper would become the RCA symbol 34 years after his death when RCA and Victor merged in 1929.
Nipper was a fox terrier/bull terrier mix. According to historians, the children of Mark Barraud named the pup Nipper because he nipped at the legs and heels of visitors. Nipper was described as a "great hunting dog and a strong adversary who'd think nothing about taking on a dog twice his size. In fact, it was difficult to get the hound to release his hold if he ever sank his teeth into you." Nipper's master, Mark Barraud died in 1887 and Nipper went to live with Mark's younger brother Francis Barraud, a painter. 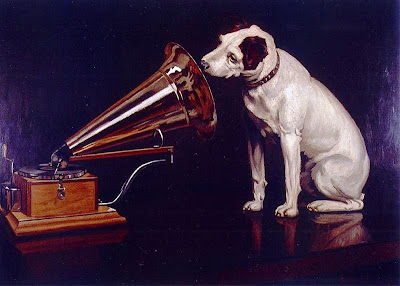 Barraud's brother Phillip was a professional photographer and took a photo of Nipper posing with his head titled, most likely the one above. Three years after Nipper's death, Francis was inspired by his brother's photo and created this famous painting in 1898.
Barraud painted Nipper listening to an Edison phonograph. He tried to sell the painting to Edison-Bell but was turned away. Barraud was told, "Dogs don't listen to phonographs". Barraud then went to Edison's competitor, the Berliner Gramophone Company. Barraud painted over the Edison machine and sold the painting for £100, the equivalent of $485 US and £50 ($240 US) more for the copyright in 1899. 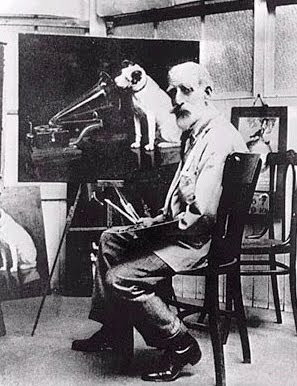 Francis Barraud
Nipper lived his entire life in England and died at the age of 11 in 1895. He was buried under a Mulberry tree in southwest London.
Mike Wilcox, "Advertising History: The Origin of 'Nipper', the RCA Victor Dog"
Oliver Berliner, "Wags and Tales That Started a Revolution"
Neil Maken, "Alive in Our Hearts and Very Collectible"
famous pit bull owners: the thomas alva edison edition
Pit Bulls: True Lies? An article from the book, American Pit Bull Terrier by Amy Shojai
Anonymous pit nutter pit bull propaganda page
Paul 107, Bully: The Pits
a screen shot of a page from Paul 107's book of pit bull "facts".

Labels: Nipper, Thomas Edison
Newer Posts Older Posts Home
Subscribe to: Posts (Atom)
“The great enemy of the truth is very often not the lie — deliberate, contrived and dishonest — but the myth — persistent, persuasive and unrealistic. Too often we hold fast to the cliches of our forebears. We subject all facts to a prefabricated set of interpretations. We enjoy the comfort of opinion without the discomfort of thought.” John F. Kennedy