The tide is turning once again. The pit bull apologia recently went on a large scale cut n' paste spree, asking dull minded and lazy journalists to pop a pre-fab nanny dog blog into their columns. That spree has been sending several thousand people to the Nanny Dog Myth post in this blog. Thanks guys for putting the Truth About Pit Bulls blog on the first page of google results. It's so much easier to find now! And lo and behold, In the comments sections of those articles, we read with astonishment that the pit bull apologia is actually backing away from the nanny dog myth:

"While I do not subscribe to the "Nanny" dog theory (NO child should be left alone with ANY dogs)..."
"The term "nanny dog" should not be taken to a literal extreme."
And previously, from the KC dog blog:
"yes Lori, the pit bull haters use the nanny dog against us, because they know it's not true. It should be enough for us to say that pit bulls were beloved family pets (and at the same time they were commonly fighting dogs)... we have tons of photographic/written contemporary evidence for that, and we can throw that evidence in the haters' faces. When we exaggerate, we lose effectiveness... which is the point Brent is making as well."
Ah, look at that. Now the pit bull apologists are backing away from the nanny dog myth and pulling out old photographs as "proof" that pit bulls were always regarded as house pets who were safe and loving companions to children.
As blogger Digger astutely argued, they're "moving the goal post."
"This is what we call moving the goal post. If this is your new argument then you will have to acknowledge that the title is nothing special. Almost ANY breed of dog could be named or be known as a "nanny dog." Apparently all you need as proof by your criteria is a bunch of pictures of a certain breed with the child. ... Your argument is faulty and flawed, now you're just scraping at the bottom of the barrel in hopes that some form of copy-pasted information you throw out in your defense will actually work."
Supposedly, the existence of these old photographs with no provenance and no accompanying explanation proves several things:
1. The parents who let their children pose with an animal always have good judgment and would not put their children in a dangerous situation.
2. The dogs we see in those old photographs of pit bulls with the children were simply family pets and weren't used for dogfighting.
3. The dogs pictured were cherished and valued solely as devoted companions of the children they're pictured with, and the owners weren't dog fighters making brag photos of their most prized possession next to a child that was being used solely as a prop.
4. Capturing that one moment in time proves that a pit bull is safe.
First Point
Parents who let their children pose with an animal always have good judgment and would not put their children in a dangerous situation.
Nanny alligators and crocodiles: 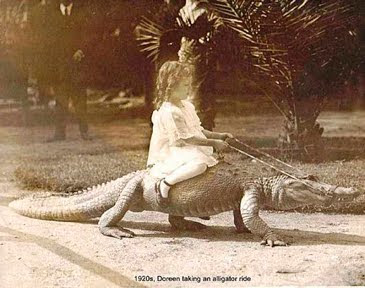 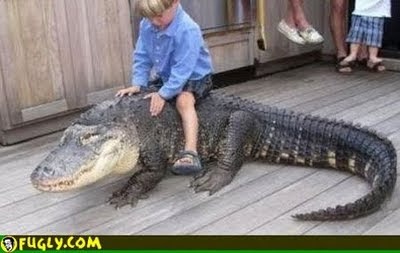 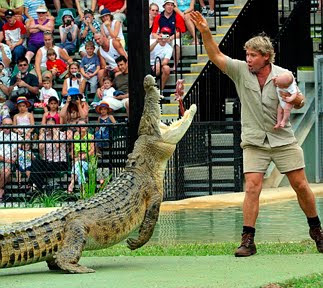 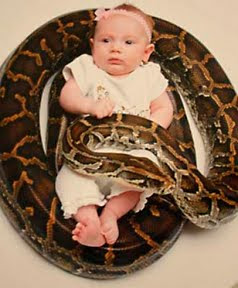 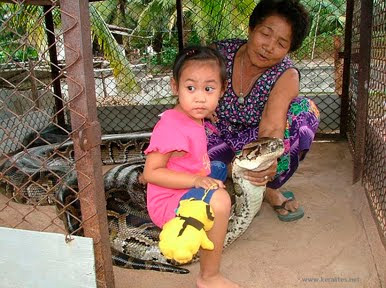 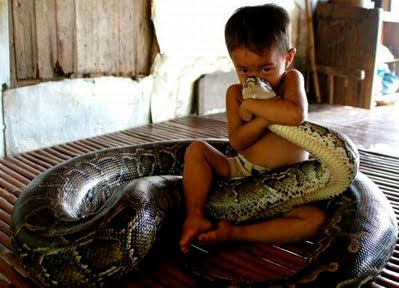 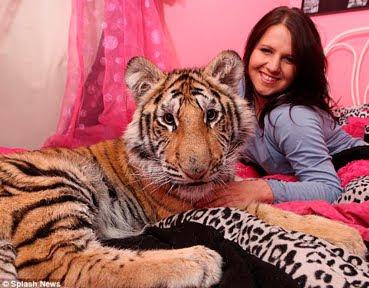 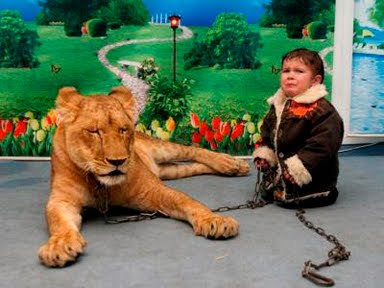 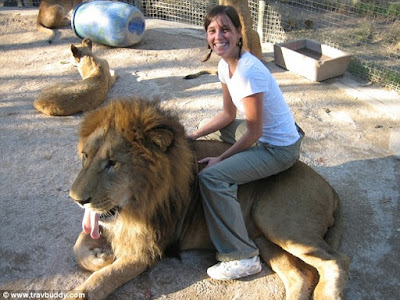 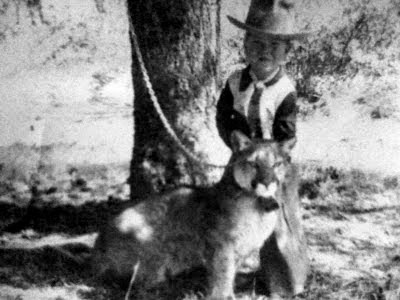 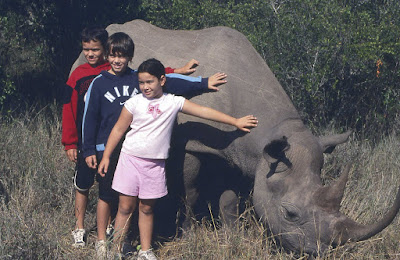 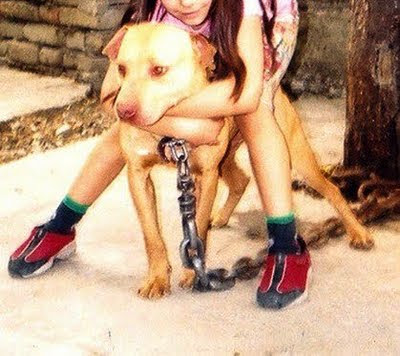 Click at your own risk to see some extremely disturbing photos that demonstrate the above photographs lie if presented as proof of safety and good judgment.
Second Point
The dogs we see in those old photographs of pit bulls with the children were simply family pets and weren't used for dogfighting.
The following photos look like the many vintage family photos on pit bull apologist websites purporting to show pit bulls as simply family pets. 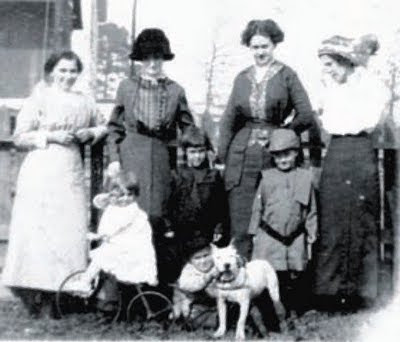 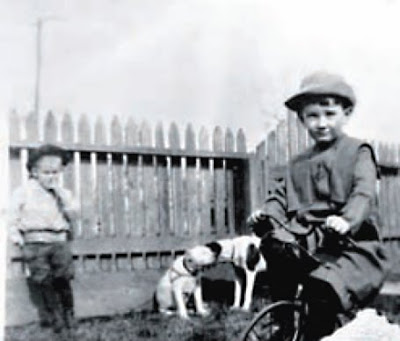 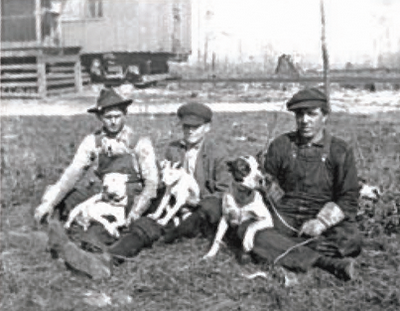 There is provenance and a written record of these photos, however. They are from the family scrapbooks of Gary Wilkes, an acclaimed animal behaviorist, trainer and author with over 30 years experience studying and training dogs. His grandfather was a dogfighter and the dogs seen above with the family fought in the pit. One of them attacked a man and caused the man to lose his leg. After that, the family got rid of the dogs. He wrote an insightful and instructive article about about pit bulls and why regulation is necessary.
Third Point
The dogs pictured were valued and cherished solely as devoted companions of the children they're pictured with, and the owners weren't dog fighters making brag photos of their most prized possession next to a child that was being used solely as a prop.

Do any of these children look like they're with their devoted and beloved companion? All three children look somewhat worried and afraid. The dogs aren't attentive to the children either and seem to be attentive to someone off camera. Could the children be afraid of taking a picture? Sure. Could they be scared of a dog they don't know? Sure. Is there anything to indicate more than a dog that is sitting on command next to a child that does not look comfortable or relaxed for a very short period of time? No. Supposing anything more would just be guessing and spinning tales. "This is little Mudd & our fine dog Jack"
--from inscription on third photo
Are these photos of a child with their dog, or photos of a valuable asset with a child being used as a prop? These photos show the dogs front and center literally and figuratively. Can we know the the motives and priorities that prompted these portraits? No.
Fourth Point
Capturing that one moment in time proves that a pit bull is safe.
A few portraits really do seem to convey affection between a child and a pit bull.
This boy really seems to like his pit bull. 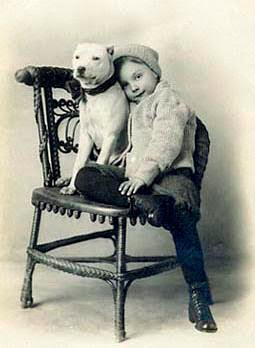 This boy really seems to like his pit bulls, too. However, these pit bulls killed a 10 year old boy after this photograph was taken. 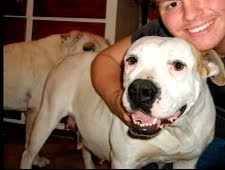 And these photos seem to show a boy with his well-loved and cared for pits, as well.  But a couple years after these photos were taken, one of his pit bulls  viciously killed him:

These old photographs can't prove that the pit bulls in the photos were safe or that it was good judgment to let those children pose with the dog. These old photographs can't prove that the photos are of family pets and companions of the child. We can't tell by looking at many of these brag photos if the owner was showing off a child and their pet or showing off a valuable and prestigious fighting dog with a child. No one can know how many pet pit bulls later "turned on" and attacked after their portrait was taken.
These old photographs prove exactly nothing. And often when we know the story that surrounds the photos, we find the photo, if used as proof of a cherished, loyal, safe family dog, is an outright lie.

UPDATE: :
After this photo was taken in South Africa, this boy's pit bull jumped over its fence and killed an elderly man with no provocation on the man's own property: 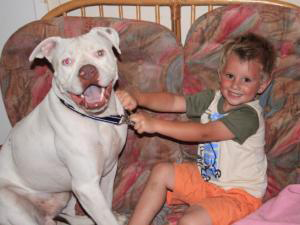 UPDATE:
This small child was killed by his pit bull very soon after this photograph was taken.  The mother judged this pit bull as an individual and believed this individual pit bull was a nurturer: 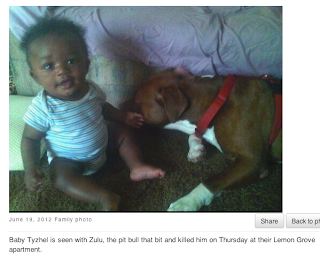 UPDATE:
These young men are showing us a photo of one of their pit bulls with one of their babies.  The photo was taken before their dogs killed a woman.  They are inadvertently proving that even if you raise a pit bull to be a family pet, it still might go on to launch an off property, unprovoked fatal attack. 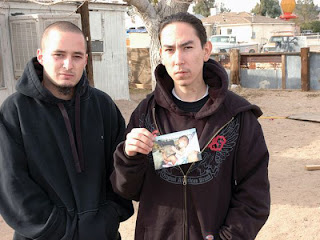 UPDATE:
June, 2013  - After this photo was taken, this boy was killed by his pit bull.  His mother said, "It was like one best friend turning on the other,” said Tilema Selu. “He had no signs of being hostile. In fact, we felt confident that it was a protector of our children.”  Selu said her son, Nephi Selu adored the pit bull mix that killed him at his grandparents’ home in Union City on Monday. 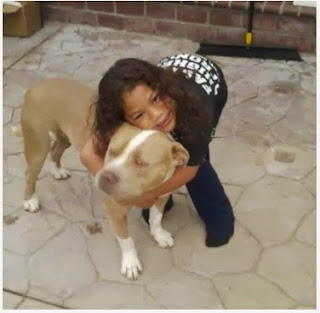 UPDATE:November, 2013 Photo of Lexi Branson hugging her pet dog that was later to kill her.  "Neighbours said the family had the dog, named Mulan, for only around two months after picking it up from a local rescue centre...Family friends said Ms Hudson had been told the dog was safe around children. The animal apparently attacked Lexi without provocation." 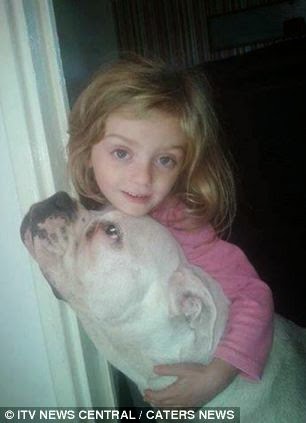 UPDATE: March, 2014 Photo of 4 year old Mia DeRouen with the 130 pound pit bull that later killed her.  Both the dam and the sire of this massive pit bull were UKC registered American Pit Bull Terriers. 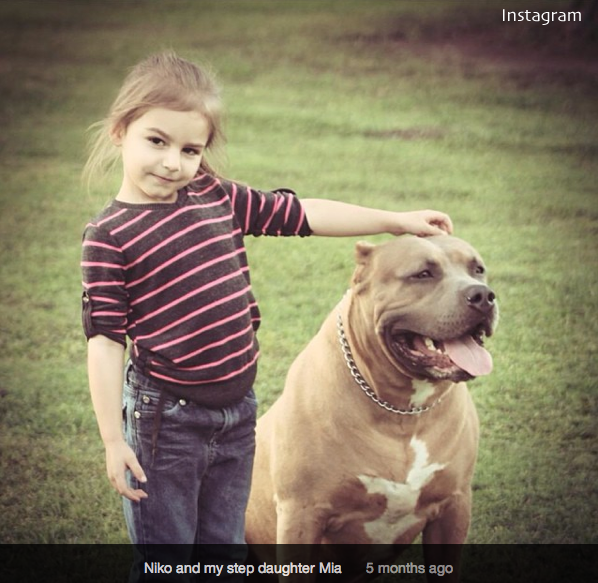 Labels: america's dog, dangerous animals, history, lies, nanny dog, photographs, pit bulls, vintage
Newer Posts Older Posts Home
Subscribe to: Posts (Atom)
“The great enemy of the truth is very often not the lie — deliberate, contrived and dishonest — but the myth — persistent, persuasive and unrealistic. Too often we hold fast to the cliches of our forebears. We subject all facts to a prefabricated set of interpretations. We enjoy the comfort of opinion without the discomfort of thought.” John F. Kennedy