"A lie can run around the world six times while the truth is still trying to put on its pants." ~Mark Twain 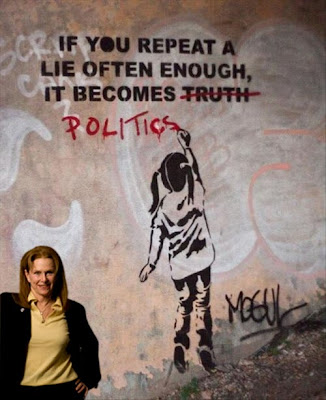 If you tell a lie big enough and keep repeating it, people will eventually come to believe it.
Joseph Goebbels, Third Reich Ministry of Propaganda

This blog has one goal: to expose the lies created by pit bull advocates and repeated to such an extent that they become regarded as truth. This propaganda strategy is known as Proof of Assertion and it is a favored tactic employed by the well organized pit bull apologia as it requires no critical thinking skills, only strength in numbers. The pit bull apologia's measure of success is even more simple. The Machiavellian like army of pit nutters need only drown out the opposition, regardless of the fact that their arguments completely lack any substance or merit. The pit bulls' army is made up of a handful of elite pit bull advocates like the sinister Jane Berkey, Ledy Vankavage, Cydney Cross, Karen Delise, Donna Reynolds, Dawn Capp and Diane Jessup who orchestrate the campaign for thousands of dedicated gullible drones that perform the grunt work; infecting the internet with the rote memorization of fabricated talking points. As their insane and baseless rantings begin to leach outside of the cult like bubble they live in and infect normal citizens, humane societies and law makers, it is critical that their lies be exposed.

One by one their lies will be dismantled here.
Posted by scurrilous amateur blogger at 11:35 PM

Thank you cking and craven desires for making this blog.

I LOVE the Twain quote. It does take time to do verifiable research.

Newer Post Home
Subscribe to: Post Comments (Atom)
“The great enemy of the truth is very often not the lie — deliberate, contrived and dishonest — but the myth — persistent, persuasive and unrealistic. Too often we hold fast to the cliches of our forebears. We subject all facts to a prefabricated set of interpretations. We enjoy the comfort of opinion without the discomfort of thought.” John F. Kennedy